InPadel Sports is the First sports-start up company in India that is dedicated  to offer quality Padel solutions which include Design, Construction, Installation and Management of Padel courts, integrated with Coaching and Organising Events/Tournaments & Leagues.

InPadel Sport was formed in March, 2017 by CEO- Bhavish Bachu, with the objective of engaging the audience and developing this sport in India.

According to CEO – Bhavish Bachu, “We are very excited to introduce Padel in India. I have been born and bought up in Portugal where Padel has been popular for more than a decade and I can vouch that anyone who plays it for the first time will appreciate the simplicity and addictive nature of the sport.”

Today, Padel is the second most played sport in Spain. He pointed out, “Padel is an inclusive sport, physically less demanding than Tennis that can be played by individuals of ages 6-80 years old. The exciting nature of the sport also allows it

to be enjoyed by families and group of friends.’’ For Bhavish, bringing Padel to India has been a dream come true. According to him, having witnessed the phenomenal growth in Europe and during his two recent visits to India, he was convinced the sport would have a big reception in India.

InPadel envisages a bright future for Padel in India. Their goal for them is for Padel to be among the Top 5 Most Played Sports in India. To achieve this objective they envision that

every multi-sports facility needs to be equipped with infrastructure to popularise Padel. They target to have at least One Lakh players in the next five years, who play Padel professionally or as a recreational sport. 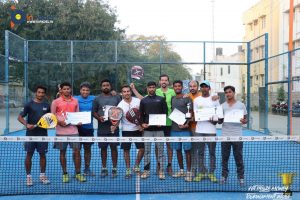 InPadel have currently setup and begun operations in 2 Padel courts across Bangalore. The response has been very positive across all age groups, with more than 1000 participants who have tried their hand at Padel. The company has already organised 6 Padel tournaments and is currently organising a Padel League which includes a Ranking Points System for players. Interestingly, 30% of Padel players are women as compared to 15% in other racket sports. This is a perfect opportunity for Indian women to be a part of this unique sport.

Padel has the potential to be an exciting recreational activity, especially in large Metropolitan Cities and as part of their Business expansion plan, they are currently in the process of setting up the Courts in Chennai, Mumbai and Delhi.

Can you imagine padel courts at the Taj Mahal??? That may happen one day… watch the video by following the link 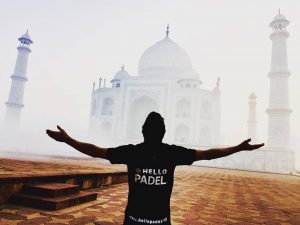 Thanks to InPadel for taking Padel to a country as beautiful as India.